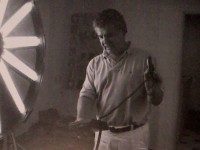 As a young adult, he started shooting weddings. While liquid batteries where the only kind available on the market, César Obarrio designed an anti-spilling device to prevent de liquid acid to damage the equipments. This devices weren´t profitable on the market so César started to work with the emerging dry batteries, which César himself would fabricate to sell to big clients such as Musitelli, Level and Servicine. During the `90s, César began to import those batteries due to the burst of importations.

In 1992, César Obarrio manufactured his first cold-light equipment, using 36 watt tubes. At that moment in his career, he started to visualize a product that only 10 years later he would be able to create. César understood that the role of the tube was very important in movies, TV and photography so he envisioned a screen with a central camcorder and a star-like distribution of light surrounding that camera. That´s how the Cyclope took form inside César Obarrio´s mind. Later on, the cold light equipment with 36 watt tubes, became the Pampa. The concept to develop the Pampa was to assemble a group of tubes (up to 12) that could be carried-on in a briefcase.

The Pampa lights are assemble with an aluminum matrix. The device can produce 4 Pampas in 2 minutes. With the same method, it can produce a Cyclope in 45 minutes.

After this great products, César Obarrio thought of a panel of lights. It would be as light and bright as possible. That´s how the Fill Kolor was born. It had 32 and 64 lamps, of 70 and 141 pounds respectively, dimerizable from 10 to 100%, without colour loss, with remote control and a double command to swich-on the tubes.

In the year 2000, a small LED (light emiter diode) flashlight, inspired César Obarrio to develop a camrecorder light, which he called O-LED. Lowering the temperature to preserve colors and adding a mirror system to amplify the power, he created this lighting device that can be used in the camera or independently whit its own battery.

Since 1985, OBARRIO LIGHTS AND BATTERIES, produces the best lighting technology, reaching functionality, the highest quality of the products and the clients satisfaction, as César Obarrio once dreamed.